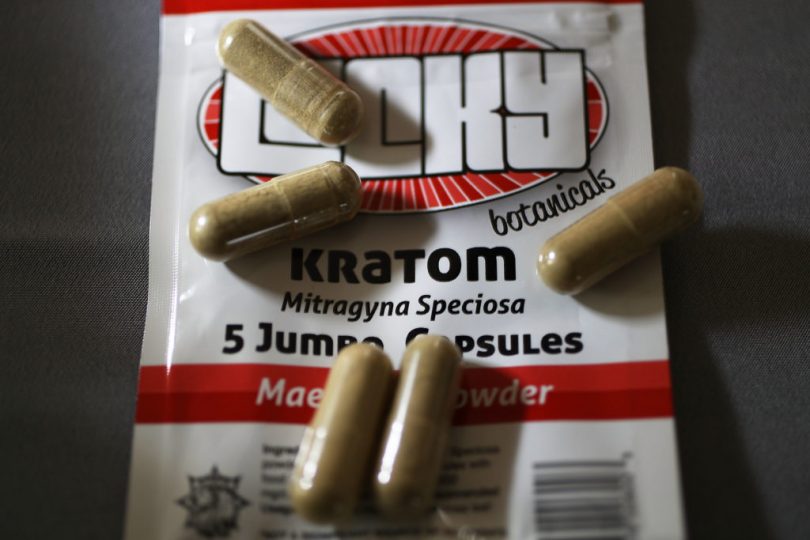 When money is scarce, Margo Burton and her husband will go without cigarettes. Sometimes her husband has to go weeks without using his cell phone.

But the loss she feels most acutely is when she runs out of an herbal supplement called kratom. She takes two teaspoons of it every three hours to control the debilitating pain caused by endometriosis.

“I need it so I’m not hurting, so I can be a good mother,” said Burton, a 31-year-old stay-at-home mom of a toddler in southeastern Missouri.

So when she read this week’s news that the Drug Enforcement Administration will outlaw kratom for two years — putting it into the same legal category as heroin and LSD — she started sobbing. She could hardly talk as she woke her husband up to be consoled.

From the DEA’s perspective, kratom is a dangerous, life-threatening drug that is creating a “public health crisis.” But to daily kratom users like Burton, the drug is a lifeline. “A whole lot of people are going to go into a deep depression and commit suicide, or start back on dangerous drugs that cause them to OD,” Burton said.

It’s easy to dismiss kratom users as herbal remedy enthusiasts, intent on using psychoactive plants however they like. But the DEA’s decision has revealed, instead, a hidden nationwide network of advocates, educators, and devotees who talk about discovering kratom the way some Christians talk of being born again.

Many use it to try to wean themselves off opioids. Others use it to manage the pain of autoimmune disorders or car accidents. Veterans use it to tamp down their post-traumatic disorder. Users recognize that an unregulated substance comes with certain risks, so they have banded together on the internet to vet kratom vendors and mentor new converts.

Now the community is ramping up to battle the DEA. At the center of that fight is Susan Ash, the founder and director of the American Kratom Association.

The Queen of Kratom

In 2008, Ash got so sick she couldn’t care for herself. It blindsided her. She had been working as a conservationist in Oregon, hiking through majestic tracts of forest as part of her work day, but she had to give it up and move back in with her parents in Norfolk, Va.

“The pain was excruciating,” she said. “It was in my joints, it would wake me up in the middle of the night, it would have me in the emergency room.”

Doctors thought it was fibromyalgia, and began to prescribe her heavy-duty opioids. But in 2010, she tested positive for Lyme disease. That was only part of her trouble, though: she soon found she was addicted to opioids, counting the hours until her next dose.

She had heard about kratom in a Lyme support group. She was suspicious at first, and didn’t want to have anything to do with the woman who made the suggestion. “I was frightened, really frightened,” she recalled. “I avoided her for a few weeks.”

But then Ash began to do some research.

She learned that kratom is the name of a tree with wide glossy leaves and yellow flowers, grown in the jungles of Southeast Asia. She learned also that it had been used for centuries by those who were experiencing opiate withdrawal.

Eventually, she called the woman back. “She had to walk me through this whole process, how to take it, who to buy from,” she said.

Much of the kratom consumed in the United States is grown in Indonesia and Malaysia, where the leaves are dried and ground into a powder. That, in turn, is compressed into 5-kilogram bricks and shipped to American vendors. Kratom is sold in smoke shops and sometimes even gas stations, but Ash and most kratom users buy it online.

26 overdoses in just hours: Inside a community on the front lines of the opioid epidemic

It was kratom, Ash said, that allowed her to escape the opioid epidemic. She ended up in rehab in 2011, and was weaned off her pain pills with Suboxone, a medication that itself contains opioids and can be addictive. So, after eight months, against her doctor’s orders, she weaned herself off Suboxone with kratom.

“This is the plant that returned me to being a productive member of society again,” she said.

Many states, however, didn’t see it that way.

In 2013, Tennessee outlawed the selling and possession of kratom, and more states were headed in the same direction.

So, in 2014, Ash started the American Kratom Association to try to keep the substance legal. With kratom keeping her pain at bay, she said, she began flying from state to state, meeting with legislators and speaking at hearings. Over the course of three months this year, she visited six states to try to beat back proposed kratom bans.

The irony is that she agrees with some of the reasoning behind the crackdown.

Kratom worries physicians partially because opioid addicts are using it instead of seeking medical help.

But they also worry about it because what they think is kratom might not actually be kratom.

“Here’s the problem in the United States,” explained Dr. Edward Boyer, an emergency physician and toxicologist at Boston Children’s Hospital, who has done research on the substance. “If I walk up and buy a bag of kratom, I don’t know what’s in that. Is it kratom? Is it some plant matter to which an opioid has been added? There’s evidence that some unscrupulous businessmen have taken plants and sprayed hydrocodone on them.”

That’s because of the Dietary Supplement Health and Education Act of 1994, which prevents the Food and Drug Administration from regulating dietary supplements unless they are sold with packaging that claims they have medicinal benefits.

As more and more states have looked into banning kratom, the FDA has also been cracking down, outlawing its import and ordering the seizure of any batches that do make drug claims.

But, as FDA spokesperson Lyndsay Meyer told STAT in July, “We have very little power over supplements.”

And that’s something that Ash — suspicious as she is about government regulation — worries about.

“There is a problem with some rogue industry people out there putting things into kratom that may or may not be natural. You don’t want people to be nervous that it’s a huge widespread problem and never take kratom,” she said.

So some kratom users have formed a kind of do-it-yourself FDA, approving or denying certain kratom vendors, trying to make sure that the stuff they are putting into their bodies every day is safe.

The inspectors have little or no training in toxicology, chemistry, or medicine. They don’t have home laboratories. But what they do have is experience taking kratom. They are the administrators of one of the most popular online kratom communities, a closed Facebook group called Kratom (New and Current Users.)

“You have to be vetted by the admins of the group in order to advertise,” said Kathy Timinskis, a 66-year-old group administrator, who lives in Zimmerman, Minn.

To kratom sellers, the vetting process is worth it: the group has over 13,000 members.

“Once they start advertising in there, they’re going to get a lot of business,” said Margo Burton, the mother in Missouri, who is another administrator.

So the vendors agree to fill out the Facebook group’s application forms, send the administrators a copy of their business license, and send off samples to independent laboratories to be tested for contaminants such as salmonella and E. coli. The vendors then pass on those lab reports to the administrators of the group.

But they also need to send something else: samples of their products. Usually, vendors send 3 ounces of each of the three different strains.

“We’re kind of like the guinea pigs,” said Burton.

“If you’ve been taking it for as a long as I have, you know what it looks like and what it tastes like,” said Shannon Scatolini, a 40-year-old legal assistant from Corvallis, Mont., who has been taking kratom for over 12 years and who said she used it to wean herself off opioids.

Users describe the taste as earthy and bitter, and as Scatlonini said, it’s as fine as flour, so it’s easy to see if there is some kind of contaminant. Once, one of the inspectors found a shard of glass glittering in the green powder.

They did not warn their 13,000 followers about that producer, though.

“We just didn’t accept them,” said Scatolini, “and we didn’t allow them in our group.”

Scatolini and Burton say that none of them has ever gotten sick from the kratom they’ve tried, and they provided STAT with examples of reports from a Michigan laboratory showing that samples of kratom had been tested for bacteria, mold, and yeast.

For Burton, being one of the self-appointed watchdogs of the kratom community comes with an added bonus.

“I live check to check,” she said. “There were two times where I was about to run out, and then I got a vetted vendor sample and it held me over until we got a check and I could order more.”

On most mornings, if her daughter isn’t up yet, the first thing she does is go to the mason jar of kratom on her kitchen counter. She takes a drink of sweet iced tea from a cup that’s ready in the fridge, pours two teaspoons of the greenish powder into her mouth, and then washes it down with another gulp of tea.

It’s a method she calls “toss and wash.”

“Some people take capsules,” she said. “Some people parachute it: If you don’t have capsules, you wrap it up inside a tissue or a fruit roll up or a flattened candy in order to mask the taste.”

But those daily rituals will soon become a criminal offense.

Stocking up while it’s legal

“This is not a woulda coulda shouda,” said Russ Baer, a spokesperson for the DEA. “This is definitely going to happen as early as September 30, 2016, or shortly thereafter.”

The agency defended its action, saying it was aware of 15 kratom-related deaths worldwide between 2014 and 2016.

Kratom advocates, however, say these terrible effects are always caused in conjunction with other drugs — and they are hoping to hash that disagreement out in court.

“We’re in the process of hiring a federal lobbying firm, a PR firm, and an expert toxicologist [who] can challenge the DEA’s claims that there have been deaths tied to kratom,” said Ash. She is also looking for lawyers with experience fighting the DEA, as are some kratom vendors.

The ban on kratom will last two or three years, during which time the Department of Health and Human Services will determine whether kratom poses a threat to public health. If studies find that it does, kratom will remain illegal; if not, the ban will be lifted.

It has happened before: a drug called TFMPP, often thought of as a stand-in for ecstasy, was banned by the DEA in 2002, only to be legalized again two years later.

In the meantime, kratom users are scrambling to buy as much of the greenish powder as they can while it’s still legal.

“Everybody I know is stocking up right now, and the vendors are running out,” said Margo Burton.

Her mason jar has only a half-kilo of kratom left. That’s enough to last her a few weeks — and she dreads the day when she has to go back to taking opioids.