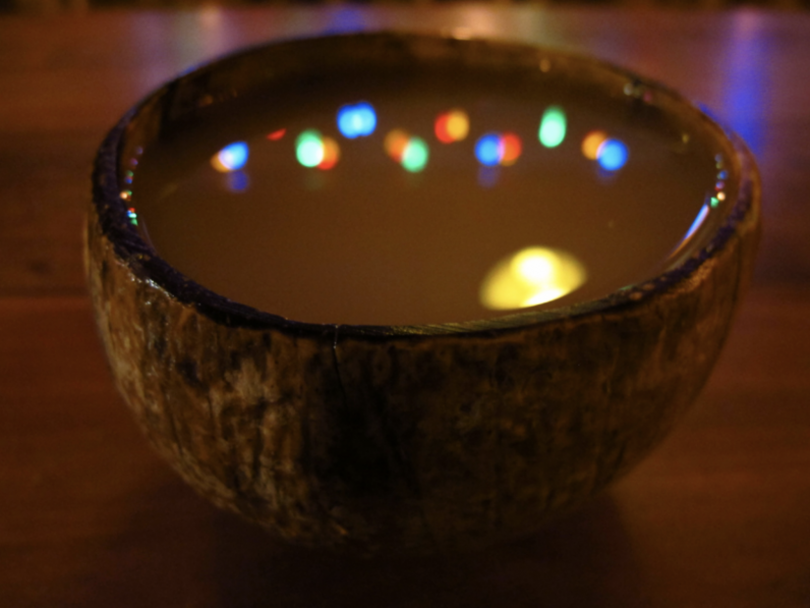 Chris Mortensen, an employee at Sovereign Kava said when the bar opened in Downtown Asheville in 2010, it was the first and only kava and kratom bar in Western North Carolina. Mortensen said other bars have opened in Sylva, Black Mountain and Weaverville and with it, a die-hard community has formed around the two beverages.

Mortensen said he first started going to the kava bar when it was on Eagle Street about seven years ago and has been coming ever since. He said the transition throughout COVID-19 was rough due to uncertainty about the future but was ultimately worth staying open.

“We didn’t know what the fuck was going on,” Mortensen said. “We didn’t have it set up for to-go stuff yet, so we had to scramble to come up with a to-go and takeout situation.”

He said Sovereign initially didn’t know how closing indoor service would impact sales but were pleasantly surprised to see regulars showing up to buy large quantities of both beverages.

“I think they were afraid that they were going to have to close and then we realized ‘Shit, we don’t have to close,’” Mortesen said. “But we had to reduce staff by a bunch.”

Mortensen said Sovereign is luckier than other bars that were forced to close in town because of their die-hard regular customers.

He said a lot of the regulars at the bar we’re worried about it shutting down completely. He said changes occurred day-to-day, causing Sovereign to shut down completely but quickly switched to strictly take-out.

“Everybody wanted to hang out and nobody could,” Mortensen said. “Everyone just was feeling the impending isolation that we all had to go through so I think it was rough for everybody. And it was rough for me and that’s part of why I stayed on workinbecause I could’ve taken the layoff.”

Mortensen said he was happy to go in to work during the pandemic because it gave him something to do. He said Sovereign had to reduce the staff, increasing the remaining employees’ workload substantially.

“I became the official COVID squeezer,” Mortensen said. “I squeezed 50 something days in a row. I was here everyday.”

Brendan Hunt, a regular at Sovereign Kava of four years, said when Sovereign closed its doors it was hard to adjust but was happy they didn’t fully close.

Hunt, 26, said the bar had to eliminate indoor service in order to comply with health and safety rules and precautions.

“I know that at Sovereign, they’ve had all sorts of different standards that they’ve been trying to uphold throughout this,” Hunt said. “They’ve been transitioning as the COVID situation improves.”

Hunt said he was fortunate to keep his job throughout the pandemic and therefore was able to sustain his kava and kratom drinking habits.

“The hardest part was just reorganizing my routine,” Hunt said. “But it all had a silver lining so it’s difficult to even describe it as hard.”

Hunt said one of the other most challenging parts was handling the ambiguity over what the future holds, especially during the beginning when protocols were changing every day. He said while Sovereign’s restrictions were extreme they we’re doing the best they could.

“I’m not a business owner,” Hunt said. “I’ve never owned a business and I wouldn’t understand the anxieties of trying to toe the line for the sake of keeping your business and have income flowing.”

He said during these weird times weird measures must be taken to keep business going.

“I think the area and political influence being in Downtown Asheville contributes to how management chooses to run their business,” Hunt said.

Easton Cantwell, the owner of Sip Sum, a new kava, kratom and tea bar in Sylva, said the bar opened in the midst of the COVID pandemic. He said the bar was supposed to open in January but was pushed back to March in order to fulfill ADA compliances.

“We were about to open like two days before the governor shut everything down,” Cantwell said. “So I couldn’t open.”

He said because Sip Sum is in a remote place in the mountains compared to Sovereign Kava in Downtown, it has allowed them to stay.

“It’s way less strict here,” Cantwell said. “But the bar still had to change many things to accommodate for COVID and the state, in general.”

Cantwell said for the first sixth months he had to pay out of pocket on the house with nothing coming in.

“All my money went to keep this open while we went through COVID,” he said.

But in the first month of the bar being opened, he said with the help of the existing kava community in WNC, it broke even and made enough to pay all of the bills that month, including the employees’ pay and taxes.

“The place was hard to keep going at first,” Cantwell said. “With no income it kind of made you want to give up. But I’m not that type and none of us are so we just held out. It was difficult.”

Mia Karr, 20, studying new media at UNC Asheville, said her older sister introduced her to Sovereign Kava a couple of years ago but said she only started frequenting it daily around this time last year.

“When I first came there, it wasn’t really about the kava or the kratom,” Karr said. “It was just such a different space. I had never been anywhere like there.”

Karr said as she became more comfortable and met more people she started continuing to go back. She said kava and kratom also help her to stay motivated and complete her school work.

“I became so accustomed to just going there and doing my school work and talking to people,” Karr said.

When the bar first closed she said she was not in Asheville but when she moved back for school it was strange to not have the bar to go to.

“Honestly, I just miss having a really comfortable place to be. It was kind of like a safe space and it’s not really there anymore,” Karr said. “And that sucks but it’s a pandemic.”

Karr said although people have finally started to go hang out at the bar again outdoors it’s not nearly as busy as it used to be.

Mortensen said the upcoming winter season is a concern for Sovereign when it comes to comfortably accommodating customers while also following COVID-19 precautions. He said Sovereign is preparing for the season to accommodate customers while keeping it safe for the community.

Hunt said this winter is going to put a lot of pressure on businesses to allow patrons to socially distance comfortably in colder weather conditions.

“It’s also going to be difficult because when winter comes around is when people get mild illnesses,” Hunt said.

Hunt said people will be sneezing and coughing and it will most likely have nothing to do with COVID but will still increase anxiety across the board.

“That’s just an undeniable truth about winter,” Hunt said. “I don’t know what that’s going to look like in the context of COVID.”

Cantwell said the kava community is very tight-knit and affectionate but with winter rolling around people are going to be very distrusting of each other.

“We’ll sit around for hours playing games with each other, talking and definitely being in each other’s bubbles,” Cantwell said. “Now everyone’s been sketched out.”

Cantwell said while everyone is trying to come back together each person has their own idea of how to do that. He said certain things should be common sense that we all should be able to do in order to keep the community safe and healthy.

“I think we should try to just be as normal as possible,” Cantwell said. “Stay safe, wash our hands. If you’re sick don’t go hang out at the kava bar.”