The CDC says kratom, an herbal supplement, was a cause of deaths in 91 fatal overdoses in the United States from July 2016 to December 2017. USA TODAY

COLUMBUS, Ohio – State regulators have delayed action to ban kratom after hundreds of people came here Friday in support of the herbal supplement.

The Ohio Board of Pharmacy planned to advance the ban on Monday. But a board spokesman said Friday afternoon that has been delayed so the board can review extensive testimony presented during a Friday public hearing. At least 92 people were expected to testify in opposition to the board’s proposal.

Many of them said they have quit opiate addictions with the help of kratom, an herbal supplement typically taken as a powder or tea.

Meanwhile, Ohio lawmakers could decide to regulate the supplement instead of ban it. Rep. Gary Scherer, R-Circleville, told The Enquirer he’s filing a bill to regulate kratom based on regulations passed in Utah.

Scherer said he doesn’t know enough about kratom (pronounced KRAY-tom) to support its use but that the legislature should weigh in on the topic.

“I don’t know if I’d vote for the bill or not myself,” Scherer said.

The Ohio Board of Pharmacy has been working through the process to make kratom a Schedule I controlled substance since last September. The board planned to send the proposed change to the final stage in the process on Monday but now will wait until after the board’s September meeting.

“This will give the Board time to review all testimony at its September meeting and assess potential new legislation that was introduced on the matter,” spokesman Cameron McNamee said in a statement.

Kratom comes from the leaves of a Southeast Asian tree similar to coffee. It’s sold in specialty stores, head shops and gas stations, as well as online.

The main active compounds of the plant are Mitragynine and 7-hydroxymitragynine – that’s what the pharmacy board wants to classify as Schedule I drugs. The board claims the substances have a high potential for abuse and no accepted medical use. The board was also concerned about how kratom, which has opioid-like effects, interacts with opioids. 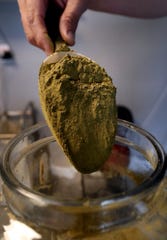 An Ohio lawmaker plans to introduce a bill to regulate kratom instead of ban it. (Photo: HELEN COMER/DNJ)

Nearly 100 kratom consumers and advocates asked the pharmacy board to drop the proposed ban on Friday. Many said Kratom has helped them when pharmaceuticals have not.

In low doses, kratom has a stimulating effect. It is taken in larger doses to relieve pain.

Larry Fouts, 59, said kratom has relieved his neuropathy – the pins and needles feeling in his hands and feet – that opiates couldn’t help. And unlike opiates, he hasn’t had to increase his dose since he began taking it one year ago.

Fouts, a former elementary school teacher who lives in Columbus, said the board’s delay was a “wonderful surprise.”

“You tend to feel sort of gloomy and that their minds are already made up,” Fouts said. “It’s nice to see they’re responding to what people are saying.”

Fouts and other kratom advocates say state lawmakers should regulate kratom so consumers know they’re getting a pure substance.

Scherer said his bill is modeled after Utah’s Kratom Consumer Protection Act. The Utah law bans “adulterated” kratom that’s been combined with other substances, limits the amount of the active compound that can be sold and requires testing and labeling of kratom products.

Kratom has been banned in six states, including neighboring Indiana. The U.S. Food and Drug Administration dropped its plans to ban kratom after being flooded with public comments.