By Richard A. Oppel Jr. and Serge F. Kovaleski

The steep rise in the number of people suffering opioid addiction has helped spawn the widespread use of another substance: kratom, a green powdered herbal supplement that is widely available and virtually unregulated.

Derived from the leaves of a tree native to Southeast Asia and sold in the United States online and in bodegas and head shops, kratom has long been used as a mood booster, energy supplement and pain reliever.

It is also increasingly being used by those who swear by it as a curb for opioid addiction. Some veterans also say it helps control symptoms of post-traumatic stress. Several million Americans are now believed to use kratom.

One is Andrew Turner, whose PTSD, herniated discs and movement problems affecting his face and neck were so severe after multiple deployments with the Navy that he took as many as 20 prescription medications, including opioids, daily. “I was on the path to suicide, and losing hope,” Mr. Turner said.

After he began drinking kratom tea, the pain and dread diminished, he said. “It was a night-and-day difference.”

But the authorities warn that kratom can be dangerous. Reported side effects include seizures, hallucinations and symptoms of psychosis, and there have been calls from inside the Trump administration to curb its use. A new government review links kratom to nearly 100 overdose deaths.

“There is no evidence to indicate that kratom is safe or effective for any medical use,” Scott Gottlieb, until recently the commissioner of the Food and Drug Administration, said last year.

The F.D.A. has warned people to avoid using kratom, saying it “appears to have properties that expose users to the risks of addiction, abuse and dependence.” It has also raised concerns about false marketing and impurities in the supply.

Last week, the federal Centers for Disease Control and Prevention weighed in, reporting that kratom had been found to be a cause of death by medical examiners or coroners in 91 out of 27,000 overdose deaths examined by the agency over an 18-month period ending in December 2017.

A look at how opioids hijack the brain, from temptation and tolerance to relapse and recovery.

The new report is the highest tally yet of deaths in the United States where kratom is said to have been a factor. But the numbers pale compared to the death toll from opioids: almost 48,000 in 2017, according to federal data.

And like other reports that have linked kratom (pronounced either kray-tum or rhymed with atom) to fatal overdoses, there was a significant caveat in the C.D.C. numbers: the majority of deaths involved additional factors.

In seven deaths, kratom was the only substance found, though the C.D.C. said that it could not rule out the presence of other substances in those cases.

“Kratom was present primarily in deaths that occurred as a result of overdoses related to substance misuse,” the C.D.C. reported. The report does not specify whether the kratom was being used to fight drug dependence or for other reasons.

The U.S.-Mexico border is a daily headline. A political football. And also home to millions of people. Every week for the next few months, we’ll bring you their stories, far from the tug-of-war of Washington politics.

The new C.D.C. report is sure to fuel debate inside the government about whether to put kratom on the Drug Enforcement Administration’s permanent Schedule I list of controlled substances, which includes heroin and L.S.D.

Some scientists — and leading politicians, including Mick Mulvaney, now President Trump’s acting chief of staff — have also expressed concerns that putting kratom on Schedule I would stymie research into alternatives for opioids and for treating opioid withdrawal.

Kratom has been widely used in Southeast Asia for years without reported overdose deaths, though there have been reports of users becoming more dependent and tolerant of it with increasing doses, said Oliver Grundmann, a professor of medicinal chemistry at the University of Florida who has been studying the supplement.

While Dr. Grundmann said he fully endorsed the F.D.A.’s concerns about keeping unsafe products from consumers, he said it is not clear what actually caused many of the deaths attributed to kratom.

“If somebody had a pre-existing condition or had been taking prescription drugs or illicit drugs, it is exponentially difficult to pull apart all of the substances and compounds they had been exposed to and determine what is actually responsible for that person’s death,” he said.

Dr. Grundmann was one of a dozen researchers who in November warned the Department of Health and Human Services and the D.E.A. that putting kratom out of the reach of consumers could cause bigger problems, leading them to seek it on the black market or relapse to using opioids, posing what their letter said was “a serious risk of death.” 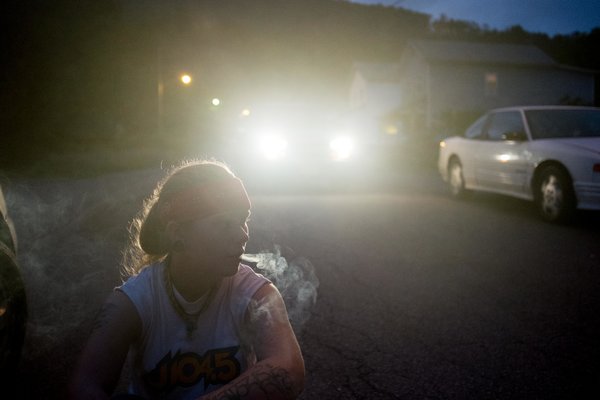 Photographer Mark E. Trent chronicled the everyday lives of friends who were addicted to drugs. Some survived. Others did not.

Advocates of kratom blame some deaths on adulterated products that contained other drugs or dangerous substances. (Last year, the F.D.A. also found salmonella in kratom shipments. Fifty hospitalizations were reported, but no deaths.) The advocates have been pushing for tighter manufacturing and labeling requirements.

Critics who warn of kratom’s hazards point to examples like Caleb Sturgis, 25, whose family sued a kratom distributor after Mr. Sturgis died last summer when his car hit a curb and flipped over.

The coroner determined that the cause of death was “acute mitragynine intoxication,” a reference to the principal psychoactive element of kratom. Outside of high levels of mitragynine, the only other substance noted in the lab report was caffeine.

“The only thing they found in his system was a high level of kratom, and caffeine consistent with a cup of coffee,” said Robert Mongeluzzi, a lawyer for the family. “It simply isn’t safe.”

Kratom has been banned in a half-dozen states and in a handful of local jurisdictions.

The prospect of a federal ban produced a furious backlash in 2016, when the D.E.A. announced plans to temporarily place kratom on the Schedule I list, citing a “high potential for abuse” and no accepted medical use.

Users flooded the D.E.A. with letters denouncing the proposal. Mr. Mulvaney, then a Republican congressman from South Carolina, and 50 other House members sent a letter to the agency urging a delay.

The D.E.A.’s move would “put a halt on federally funded research and innovation surrounding the treatment of individuals suffering from opioid and other addictions — a significant public health threat,” they wrote.

Nine senators, including Bernie Sanders of Vermont, who is vying for the Democratic presidential nomination, also pressed the D.E.A. not to restrict the supplement without going through its normal deliberative process, citing “the long reported history of kratom use, coupled with the public’s sentiment that it is a safe alternative to prescription opioids.”

Under pressure, the D.E.A. walked back its plans. But inside the administration, officials have continued to push to curb kratom’s availability. In November, STAT News disclosed a memo in which the Department of Health and Human Services and the F.D.A. recommended that the active alkaloids in kratom be put on the permanent Schedule I list.

The department now says that the memo was “pre-decisional.” But an H.H.S. spokesman, Bill Hall, said the department “remains concerned about the use of kratom, as there is no reliable scientific evidence to support the use of kratom for any therapeutic effects, and significant safety issues exist. Fraudulent health claims can pose serious health risks.”

The recommendation won’t be the only factor in the ultimate decision, which a spokeswoman for the D.E.A. said could take months or years. The D.E.A. will also rely on medical examiners’ reports, overdose statistics, and public comments, among other things, said the spokeswoman, Katherine Pfaff.