The herb kratom poses a public health threat and should not be sold as a dietary supplement, according to a team of researchers who say kratom should be regulated like a prescription drug because it has “opioid-like” qualities.

“Although it is not as strong as some other prescription opioids, kratom does still act as an opioid in the body,” said William Eggleston, PharmD, a professor of pharmacy practice at Binghamton University in New York. “In larger doses, it can cause slowed breathing and sedation, meaning that patients can develop the same toxicity they would if using another opioid product.

“Our findings suggest kratom is not reasonably expected to be safe and poses a public health threat due to its availability as an herbal supplement.”

Eggleston is lead author of a recent study published in the journal Pharmacotherapy that looked at the growing number of calls about kratom to U.S. Poison Control Centers. In recent years, millions of Americans have discovered kratom and use it to treat chronic pain, addiction, anxiety and depression.

Eggleston and his colleagues identified 2,312 kratom exposures in the National Poison Data System (NPDS) from 2011 to 2018, with 935 cases involving kratom as the only substance.

“Despite kratom’s growing popularity as a safe and natural self-treatment option for patients with OUD, our findings suggest there are concerns for significant toxicity. Reports of kratom exposures to the NPDS are rising and have already been associated with serious opioid toxicities, including seizures, agitation, and death,” researchers reported.

“According to the United States Dietary Supplement Health and Education Act of 1994, herbal and dietary supplements must contain ingredients that are reasonably expected to be safe. Our findings repudiate the idea that kratom meets this criterion. Kratom’s opioid effects put patients at risk for withdrawal, respiratory depression, and death.”

But critics say calls to poison centers are anecdotal, misleading and a poor choice for research.

“The data drawn from the Poison Control Centers are notoriously unreliable, inasmuch as they are anecdotal reports from the public that are gathered and reported in an unscientific fashion.  In the absence of good data, you just end up with a garbage-in, garbage-out situation,” said Max Karlin, a spokesman for the Kratom Information & Resource Center.

“The data from the centers are even more unreliable than the conclusions drawn by medical examiners and coroners, who have no specialized training or background of any kind in relation to kratom.”

By way of comparison, the 2,312 calls about kratom over an 8-year period pale in comparison to calls about other substances. In the first six months of this year alone, over 13,400 calls were made to U.S. poison centers about children ingesting hand sanitizers or laundry detergent packets.

Kratom comes from the leaves of a tree that grows in southeast Asia, where it has been used for centuries as a natural stimulant and pain reliever. As a dietary supplement, kratom is loosely regulated in the United States, although federal agencies are engaged in a protracted public campaign against its use.

The FDA says kratom has “opioid-like” qualities and is not approved for any medical condition. The agency has also released studies showing salmonella bacteria and heavy metals in a relatively small number of kratom products. The CDC recently linked kratom to dozens of fatal overdoses — although multiple substances were involved in nearly all of those deaths.

Last year, the Department of Health and Human Services (HHS) recommended to the DEA that kratom be classified as a Schedule I substance – which would effectively ban it nationwide. 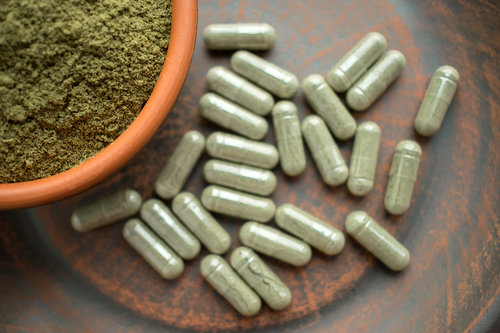 “At some level, we do need to have better control over it,” says Lewis Nelson, MD, a Professor of Emergency Medicine at Rutgers New Jersey Medical School who co-authored the poison control study of kratom. “We know that it has two big uses out there. One of them is for people to get high and the other one is to treat opioid withdrawal. Those are the real reasons people use it.

“Whether its an opioid or not an opioid, people use it do things that they would typically do with opioids, like pain, like get high and like treat withdrawal. I think empirically we know it has enough of an opioid-like character that it’s being marketed and used that way.”

Lewis said kratom should be scheduled as a controlled substance, but not under Schedule I. He thinks it may be more appropriate to classify kratom as a Schedule II or III drug, where it could still be available by prescription.

“I would like to see that. If they could show this drug has benefits and we could understand and moderate the risk, I don’t see why it couldn’t be used like any other drug,” Lewis told PNN. “Prove it works, let’s create a safe product and let’s get it appropriately scheduled. Have it available by prescription. I don’t have a problem with that.”

But getting kratom approved as a prescription drug would require years of clinical studies. And pharmaceutical companies may be reluctant to fund research on a natural substance that they may not be able to get a patent on.

In a 2016 PNN survey of over 6,400 kratom users, nearly 98 percent said they want kratom to remain available as a dietary supplement.  Over 70 percent said pharmaceutical companies should not be allowed to produce and market kratom products.  And nearly three out of four said it is not possible to get high from kratom.

Lewis remains skeptical that people are not using kratom recreationally or that it should remain on the market as a dietary supplement.

“I find it a little disingenuous to say we should leave this potentially unsafe drug on the market unregulated, just because some people already use it,” he said.