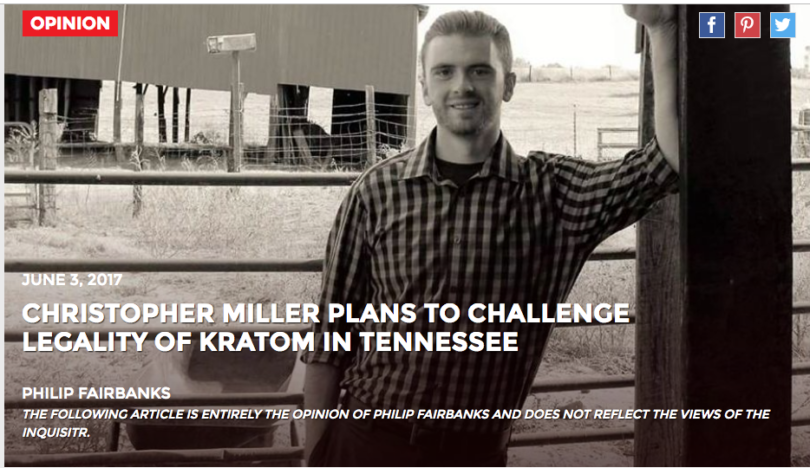 Clarksville native Christopher Miller was recently arrested in Nashville, TN for attempting to sell kratom. Kratom is an herb that recently faced up against a possible DEA ban. Luckily for the thousands who use kratom for pain, depression, anxiety or even to wean off of opiates, bipartisan support of congress and medical doctors, ethnobotanists, pharmacologists and even one of the foremost addiction specialists, Johns Hopkins professor Dr. Jack Henningfield, the DEA was forced to back down, a literally unprecedented occurrence in the history of the agency. Unfortunately, due to a great deal of misinformation, some of which comes from sources that are questionable at best, Nashville’s Metro PD were misinformed about the plant.

Metro PD’s release was made public by WZTV after a deluge of comments from Reddit users who were concerned with the inaccurate material in the original article. Kratom is listed as a synthetic substance and an opiate. The southeast Asian plant, like coffee, is a member of the Rubiacea family. As a result, it’s a perfectly natural substance and has been used in folk medicine for hundreds of years and has dozens of clinical studies related to its potential benefits for conditions as disparate as depression, anxiety, PTSD, chronic pain, addiction as well as being a more potent antioxidant than green tea that stimulates the immune system.

Jacky Ross, a friend who was acquainted with Christopher from within the kratom community, is not happy with Miller’s situation.

Culpepper Botanicals is sponsoring a 5 kilo giveaway for donations currently and several other kratom vendors, such as Clean Kratom have been stepping out to support him and his cause.

According to the affidavit, Miller is accused of attempted sale of a controlled substance analogue. There are some issues with this though. By definition, kratom is not an analogue. Unlike opiates, there is no overdose potential and it’s chemical structure is completely different. As far as it having an “opioid like effect” the same has been said of cheese, caffeine and bacon.

Nashville’s WKRN news had previously reported the headline, “Man charged with selling synthetic opiate Kratom in Nashville.” I contacted WKRN news and finally got a response this week. News director Elbert Tucker in an email explains, “The Metro Nashville police department identified Kratom in this case as ‘synthetic.’ In our follow up with them, they told us it is considered synthetic because, in state law, it is included with synthetics. The spokesperson told us that even though it is naturally occurring, it is considered a synthetic by law.”

A rose by any other name, most likely would smell as sweetly and botanically speaking, regardless of how the Tennessee law books view kratom it is an organic, plant substance.

The affidavit is further evidence that the Metro PD are unfortunately misinformed. Both the affidavit and the press release that WZTV published after the Reddit comments came pouring in refer to it as “an opiate synthetic substance.” There is even some possible gray area in the law itself. I contacted the State Attorney General’s office 2 years ago to bring up the fact that the “kratom bill” references only the constituents of kratom and does so in a bill that is specifically and solely (in title and language) related to synthetics. I had asked governor Haslam if this meant that I would be able to sell kratom as a raw herb. He said he would forward my concerns and questions and get back to me. As of this writing, Governor Haslam never responded and hasn’t responded to an attempt to get a comment on the current case here.

“I don’t believe kratom is illegal in the state of Tennessee,” Christopher Miller told us in conversation online.

” I plan to challenge the legality of the plant in the state of Tennessee.”