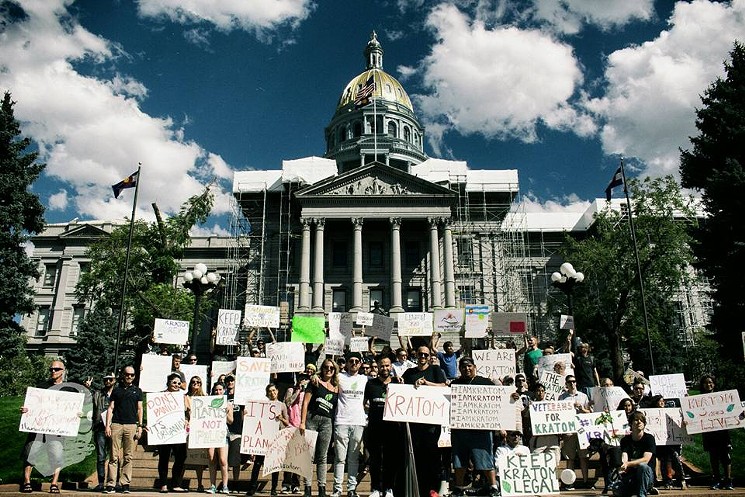 Denver Environmental Health’s recently announced prohibition on the sale of kratom for human consumption is making news and stirring controversy from coast to coast. Among those concerned is David Kroll, a onetime cancer researcher and Colorado pharmacologist now working in North Carolina as a freelance health journalist for Forbes, among other outlets. Kroll is also a nationally recognized expert on kratom, as well as the historical roots of the governmental and financial forces currently lined up against it, and in his view, “banning it is going to hurt more people than it’s going to save. That’s my scientific prediction.”

Kroll’s perspective differs from that of Nicholas Moodley, who recently shared his personal story of using kratom to get off opioids — an experience that inspired him to found a Denver-based kratom supply company, Kratom Cafe USA. For instance, Kroll is less willing than Moodley to entertain the possibility that the Food and Drug Administration’s recent health advisory about the alleged dangers of kratom, which precipitated Denver’s actions, represents evidence of a massive effort by Big Pharma to demonize a substance that could cost the industry billions. “I honestly think the FDA did this because it’s politically expedient to take action against something that sounds like an opioid,” he says.

Kroll, whose writings about kratom can be sampled at the bottom of this post, has long had an interest in “drugs that come from nature,” he notes. “When I was a kid in New Jersey, I grew up near a pharmaceutical company — now it’s called Roche, but then it was called Hoffman-La Roche. So it was my dream to work in this area, and I ended up working for a guy from the University of Florida — he was originally from Boulder — who introduced me to a bunch of cancer drugs that come from plants. I developed an expertise in that area, and when I was in Denver, I also began teaching about herbal medicine” at the University of Colorado’s School of Pharmacy and Pharmaceutical Sciences, where he was a faculty member from 1992 to 2001.

This academic experience hasn’t lessened Kroll’s fascination with organic treatments. “We’ve got this dichotomy where we have medicines that come from nature that are purified away from their other plant material to fight disease, like Taxol, which is prescribed to women with breast or ovarian cancer. But we also have Native American remedies — crude, ground-up plant material or mashed-up concoctions — that are used as medicine, too. And these two areas used to peacefully coexist. When I was training, the scientists would interact with the herbalists and there was a kind of common ground where everyone was trying to get to the truth. What works about this stuff? What doesn’t? And how can scientists help herbalists sell the best quality stuff and do so within the regulatory framework in the United States?”

By the early 1990s, however, “there was an inkling from the FDA that they were going to start to regulate herbal products as pharmaceutical drugs, and all hell broke loose,” Kroll continues. “A lot of the herbal medicine trade groups started a letter-writing campaign to Congress to protest what they were billing as the government’s attempt to take away your right to use herbs and vitamins.”

Peace was subsequently brokered by an unlikely figure: Orrin Hatch, the Republican senator from Utah. “He proposed legislation that’s abbreviated as DSHEA, the Dietary Supplement Health and Education Act,” Kroll explains. “It lets herbal companies and herbalists to sell their stuff as long as they don’t make direct medical claims about it.” Instead, entrepreneurs are limited to what the law describes as structure/function claims, involving the normal structure and function of the human body. For example, Kroll goes on, “you can say echinacea is for health and well-being during cold and flu season, but you can’t say it will reduce the duration or severity of colds and flu.”

To Kroll, this rule represents a loophole. “Everybody knows what the hell these things are sold for — so in my mind, it really let those companies off the hook.”

Of course, kratom, referred to in the scientific community as Mitragyna speciosa, isn’t new. The plant has been used medically for centuries in areas where it’s indigenous, including Thailand and Indonesia, and in the West, Kroll says, “it’s probably been known since the 1980s — and until a year or two ago, no one talked about it being addicting. In fact, some people even claim it can help you wean yourself off opioid addiction, or even addiction to alcohol. I was just at a kratom bar near the University of North Carolina, and the bar is dry; people aren’t allowed to bring in alcohol because a lot of people are using kratom in recovery.”

Scientists need to test these assertions, Kroll believes — but there are challenges. “In its health advisory, the FDA said, ‘If people want to promote this stuff, research needs to be done,’ and I agree wholeheartedly.” But  while researchers he knows at Columbia University and Memorial Sloan Kettering Cancer Center, both in New York, would love to launch inquiries into kratom’s effects, they’ve had difficulty securing the necessary resources for such an effort. “It’s not because the science is bad,” he stresses. “It’s because the environment for funding is so competitive right now.”

To get more information in the meantime, Kroll established a “kratom tipline, where people could send in their stories. At last count, I’d gotten 206 emails from people who’ve used kratom for benefit, either to treat chronic pain or to wean themselves off opioids or alcohol, and only four of those 206 became addicted to kratom. In two of those cases, the people who became addicted to kratom were family members…and three of the four kratom addiction stories involved the use of highly concentrated kratom extracts, not the crude plant.”

Because Kroll is “a scientist first before I’m a journalist,” he concedes that “scientifically, this isn’t a valid sampling, since obviously, the people motivated to write in to me were advocates. But I did specifically ask in one of my articles for people to write me if they had adverse reactions or addictions — so it’s not insignificant.”

Still, plenty of misconceptions about kratom remain, including the debate about whether it qualifies as an opiate. The American Kratom Association, which is conducting a Facebook Live today, November 29, to debunk criticism of the substance (click here to see it at 9 a.m. Denver time), insists that it’s not, but Kroll says “in point of truth, it actually is — but it’s a safer kind of opioid. It binds the same parts of the brain and the spinal cord that stronger opioids like morphine and fentanyl do, but they seem to tweak the receptors’ shape in a way that can reduce pain but not cause suppression of the breathing rate — and respiratory suppression is a major issue with stronger opioids. And in animal studies from a group at Memorial Sloan Kettering, it’s much harder to make an animal addicted to kratom than it is to morphine.”

How much more difficult? According to Kroll, “a guy I talked to there said you can make a mouse or rat addicted to morphine in about five days, and it took him about 29 to make it addicted to the active chemicals in kratom” — mitragynine and 7-hydroxymitragynine.

We don’t yet know if humans are at least five times less likely to become addicted to kratom than morphine — but this prospect may be one reason the FDA has targeted it. “Kratom is really high-profile because it’s one of the few herbal medicines that actually seems to work for people — that isn’t just some ineffective placebo,” Kroll says. “And the fact that people perceive it to be effective for whatever ails them, and that it became popular, is what got it on the radar of regulatory agencies. Last year, the Drug Enforcement Administration wanted to put it on Schedule I,” a designation on par with heroin, “and there’s a lot of correlative evidence that makes it easy for people to fall back on a Big Pharma conspiracy.”

Even so, Kroll is confident that “drug companies aren’t going to try to sell kratom, or the individual chemicals in kratom.” Instead, “there’s a company and some research groups that have developed two chemicals that have been found to work on opioid receptors similarly to the chemicals in kratom. They’re not based on kratom, they’re not extracted from kratom, and they were in development before we knew how kratom worked on opioid receptors. One of them is from a company in Pennsylvania called Trevena, and their drug, Oliceridine, is almost FDA-approved; it’s in phase-three clinical trials. And the other one is being worked on by a bunch of groups, including one at the University of North Carolina. Its chemical is just a letter-number designation: PZM21.”

Neither of these substances will directly challenge kratom in the near term. Oliceridine is an intravenous drug designed for use in hospitals to alleviate post-surgical pain — “They’re still trying to develop an oral form,” Kroll says — and PZM21 “is even further away from being realized.”

Denver Environmental Health’s announcement falls short of these policies. Kratom, which is sometimes marketed as either potpourri (because of its strong scent) or plant food, can still be sold in the city if it bears a label reading: “This product is not intended for human consumption. Consuming kratom products may pose a risk, including death, to consumers and has addictive potential. Increased risk of injury or death may be posed by consuming with alcohol and other drugs.”

Still, Kroll remains surprised that Denver officials have moved aggressively against kratom consumption. “It just seems to me that with recreational marijuana being so popular, Colorado in general would be more permissive. But I think the word ‘opioid’ has scared the hell out of politicians, and rightfully so. It’s even difficult to explain to scientists how different the chemicals in kratom are compared to strong opioids that people are getting addicted to and dying from.”

The FDA’s advisory states that kratom “has been associated with the deaths of 36 people,” Kroll acknowledges. “But overdoses are killing over 60,000 people a year, and there are a group of kratom users and advocates who claim it’s actually saved people’s lives by keeping them off stronger opioids. That’s why I fear these bans are going to hurt people. There are some folks who don’t have access to the medical system who are buying kratom online, and if kratom becomes unavailable for them, what are going to be their options?”

For more about kratom, click on the following links to articles by Kroll: August 2016’s “The DEA Is Placing Kratom And Mitragynine On Schedule I” and “DEA Argues That Public Comment Is Unnecessary Before Kratom Ban,”  plus two September 2016 pieces, “One Week Until Kratom Components Are Banned In The U.S.” and “The Benefits Of Kratom, and Risks Of Kratom Extracts, From The People Who Use The Botanical Medicine.” The last piece highlights some of the tipline comments mentioned above.