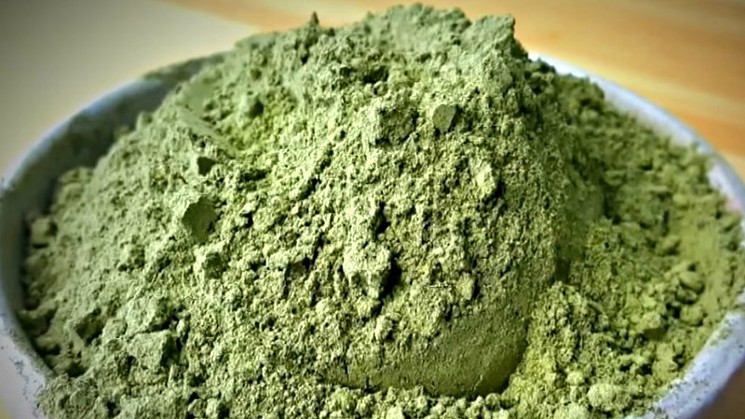 In November, Denver Environmental Health issued a human-consumption ban on kratom, a plant-based substance that advocates tout as a pain reliever lacking the well-known negative effects of more powerful opioids. Now the Libertarian Party of Colorado is formally decrying the move, and the organization’s spokesperson reveals that it’s a very personal subject for her. After all, she’s a user of kratom who believes her life would be infinitely worse if she could no longer take it.

“Who is the government to tell me that I can’t have a functional life and have to live with excruciating pain that makes me want to kill myself?” asks Caryn Ann Harlos, the Colorado LP’s communications director.

As we’ve reported, kratom has not been approved by the U.S. Food and Drug Administration, and the federal Drug Enforcement Administration took steps to reclassify it as a Schedule I narcotic in August 2016 before reversing course the following year. The change in approach was undoubtedly influenced by public backlash; approximately 140,000 people signed a petition to the White House opposing the DEA’s proposal, and a group of 51 U.S. senators and representatives sent a letter to Chuck Rosenberg, the agency’s acting head, questioning it.

Nevertheless, the feds continued to view kratom consumption as dangerous, attributing fifteen deaths between 2014 and 2016 to its use, even though fourteen of the victims had other drugs or illegal substances in their systems when they died.

The scientific name for the kratom plant is is Mitragyna speciosa, with the “mitra” prefix reflecting the shape of the leaves, which are thought to resemble a bishop’s mitre.
Getty Images

DEH didn’t ban all sales of kratom, but retailers that wish to peddle it for non-consumptive purposes must affix a consumer advisory “in large font…easily readable to all purchasers” that states: “This product is not intended for human consumption. Consuming kratom products may pose a risk, including death, to consumers and has addictive potential. Increased risk of injury or death may be posed by consuming with alcohol and other drugs.” Moreover, sellers in Denver aren’t currently allowed to give consumers advice about dosage or consumption.

This policy angered many folks who’ve had positive experiences with kratom, including Nicholas Moodley, who says the substance helped him kick an opioid habit. So impressed was Moodley by its effectiveness that he started a business to provide it called Kratom Cafe USA.

Harlos’s reasons for coming to kratom were different from Moodley’s.

“I have a degenerative back disorder, spinal stenosis, and I’ve been on and off Vicodin for fifteen years,” Harlos says. “I used to live in Florida, and Florida doctors are way different than Colorado doctors. Florida doctors helped me manage my pain. But when I moved to Colorado, the federal government started cracking down on opioids, and when I’d try to get legitimate pain medication, they made me feel like a criminal. I felt like I was having to rearrange my whole life around doctors visits and peeing in cups. That’s one reason why people with a legitimate need for these substances were living in terror.”

Caryn Ann Harlos is communications director for the Libertarian Party of Colorado.
Facebook

Given this scenario, Harlos began looking around for pain-killing alternatives — and marijuana didn’t do the trick. “I don’t like it, and it doesn’t work for me,” she allows. “It’s not for everyone.”

At that point, she goes on, “I discovered kratom, and it worked better than Vicodin. It doesn’t have any side effects. You do get a boost when you take it, but it’s a boost like you get from caffeine. If I were to drink a Diet Mountain Dew, the boost would be bigger. Vicodin gives you a little boost, too, which is why I suppose some people get addicted to it — although that was never a problem for me. I must not have the genes for addiction. But kratom’s boost is probably 30 percent of Vicodin’s. It’s not like it makes you want to party all night. It just relieves the pain.”

As such, Harlos admits that “my mind was blown” when Denver officials prohibited kratom sales for reasons of human consumption.

“The national Libertarian Party is for the full legalization of drugs, period,” she stresses. “Our position is that the government doesn’t own you — that if you want to put something in your body and it’s not harming others, it’s not the government’s business. They have no business protecting you from yourself. So even if kratom was being used recreationally, we’d oppose a ban. But kratom has obvious medical uses. It’s had no downside in my life, and it’s the same for other people I know who use kratom for pain management. They haven’t had any issues, either.”

To Harlos, then, “banning kratom is like banning Extra Strength Tylenol.”

Below, read the complete statement about kratom issued by the Libertarian Party of Colorado, which calls on Denver to reverse its decision.

DENVER’S KRATOM BAN IS A STEP BACKWARDS IN OPIOD CRISIS

The lethalness of the opioid crisis has escalated our nationwide debate on drug use. Last year, drug overdoses claimed more lives than the entire Vietnam War, and the bulk of those overdoses involved opioid abuse. On October 26, President Donald Trump declared that the opioid crisis was a “public health emergency.”

Shortly before Trump’s announcement, a study was released that concluded that Colorado’s legalization of marijuana contributed to a reduction of opioid overdoses in the state. The paper — authored by Melvin Livingston, Tracey Barnett, Chris Delcher, and Alexander Wagenaar — concludes that “legalization of cannabis in Colorado was associated with short-term reductions in opioid-related deaths.”

Colorado was proving to be an outlier in the opioid crisis.

But just before the “Colorado experiment” could take two steps forward in addressing this national issue, its largest city decided to take a step or two backwards. Just before Thanksgiving, City and County of Denver and its Department of Environmental Health officially banned the sale of kratom within city limits.

Originating from Southeast Asia, kratom is a plant-based product with stimulant- and opioid-like properties without the same risk of addiction. The drug is used both for pain relief and opioid-withdrawal cessation. Though clinical trials have not yet confirmed kratom’s medicinal value, many consumers consider it to be a “wonder drug.”

Despite its positive traits, kratom has been targeted by the federal government. In 2016, the Drug Enforcement Agency advocated for a Schedule I classification of kratom, which would have placed it in the same category as heroin, LSD, marijuana, and other federally-banned substances. Claiming that there were “numerous deaths” associated with the drug, the DEA pushed kratom dangerously close toward the precipice of an outright ban.

However, there is no conclusive evidence that kratom kills. There have been incidents of “kratom-related deaths,” where use of the drug was documented but not fully credited as the primary cause. But even this number is still miniscule: 15 of these deaths have been recorded in the United States between 2014 and 2016.

Despite the exaggerated claims of kratom’s deadliness, the Food and Drug Administration issued an alert. Citing “concerning reports about the safety of kratom,” the FDA warned against the medical application of kratom due to its psychoactive compounds. The FDA alert is what inspired Denver’s ban.

Federal nannies be damned, said the marketplace. Sales of kratom persist despite local bans similar to Denver’s. In fact, we might even see a spike as consumers will try to stock up their shelves — just like they did in 2016 when the DEA flirted with a Schedule I status — before it is deemed illegal on a national level.

If you like this story, consider signing up for our email newsletters.

Denver-area kratom users feel cheated by this ban — and rightfully so. Though the pain management qualities of marijuana have been documented, many prefer kratom for its caffeine-like effects that don’t leave them drowsy as cannabis does.

More importantly, kratom presents a safer alternative for those who are weaning themselves off of their opioid dependence. Withdrawals from opioid addiction are oppressive, and kicking the habit takes time and support. Banning safer alternatives like kratom pushes those who suffer from addiction further into the shadows, robbing them of their dignity and the opportunity for self-empowerment.

Sales of prescription painkillers, which were buoyed politically by pharmaceutical lobbyists, proliferated in the marketplace. On the other hand, the kratom industry, which is a fledgling dwarf in comparison to “Big Pharma,” is butting up against bans that lack logical foundation or scientific research. Meanwhile, those who got hooked on the former are still battling an addiction that can be easily addressed by the latter. However, choices in the marketplace are dwindling. Denver’s ban disenfranchises consumers who can make up their own minds about what to put in their bodies.

If Denver wants to get back on the wagon by demonstrating the positive qualities of legalization and decriminalization of drugs, then it must reverse its ban on kratom now.

Michael Roberts has written for Westword since October 1990, serving stints as music editor and media columnist. He currently covers everything from breaking news and politics to sports and stories that defy categorization.