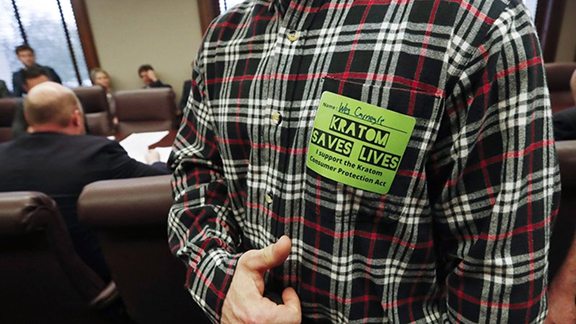 An adult supporter of the herbal supplement kratom gives a “thumbs up” at a Senate committee meeting at the Capitol in Jackson, Miss., Monday, March 2, 2020. Mississippi legislators have killed bills that would either ban or regulate kratom, an herbal drug that can be used for pain relief. (AP Photo/Rogelio V. Solis)

JACKSON, Miss. (AP) — Mississippi legislators have killed bills that would either ban or regulate kratom, an herbal drug that can be used for pain relief.

Kratom is currently unregulated in most parts of the United States, but has been outlawed by a few local governments in Mississippi amid concerns that it can be harmful.

Kratom is derived from a tree that’s native to Southeast Asia. The U.S. Drug Enforcement Agency says the leaves can be crushed and then smoked, put into capsules or taken with water or other liquids.

The DEA characterizes kratom as one of its “drugs of concern.” The agency says people have used it to relieve muscle strains and as a substitute for opium; the drug has also been used to manage withdrawal symptoms from opioids.

Former Mississippi House Speaker Pro Tempore Greg Snowden of Meridian, a Republican who was defeated in 2019, is now a registered lobbyist for the American Kratom Association. The group asked Mississippi legislators to put regulations on the drug rather than making it illegal.

Bills to either ban or regulate kratom died Tuesday when committees did not consider them before the first big deadline of the legislative session.

During a public hearing Feb. 27 at the state Capitol, physicians, Mississippi Bureau of Narcotics agents, recovering drug addicts and others took turns telling lawmakers that kratom is harmful and should be illegal.

Several people wore bright green stickers with the slogan: “Kratom saves lives.” They advocated keeping the drug legal but regulating it to ensure that it’s not mixed with controlled substances and that it’s not sold to minors.

As of 2018, kratom was illegal in Alabama, Arkansas, Indiana, Tennessee, Vermont, Wisconsin and the District of Columbia, according to the National Conference of State Legislatures. The group said Illinois and Louisiana ban the sale of kratom to minors.

Some confusion has existed about the Tennessee law that banned possession of a synthetic form of kratom. In 2017, the Tennessee attorney general’s office said kratom in its “natural botanical form” is not a controlled substance.