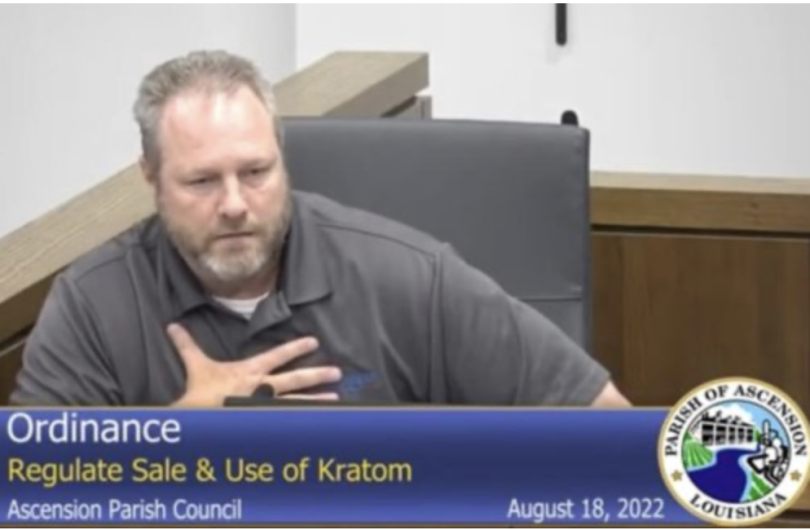 Selling Kratom in Ascension Parish will soon be illegal after a unanimous vote of nine Council members on Thursday, but not its possession or use.   Total ignorance about Kratom, freely admitted by each member bothering to speak, was no impediment to the unanimous vote endorsed by an adamantine President Clint Cointment (whose mastery of the topic was little better than the legislative branch).  Anecdotal evidence, passionately expressed on both sides of the Kratom divide, was compelling enough to convince nine council members once criminal penalties against individual users were amended out of the proposed ordinance.

“It’s almost crazy that we’re having to address this,” declared Council Chairman John Cagnolatti whose self-professed incomprehension did not prevent his conclusion; “Banning the sale is a first step.”

A first step toward what?  The amended ordinance reads, in pertinent part:

It shall be illegal for any person to sell Kratom in the Parish of Ascension (to include any product that includes any percentage of Kratom’s psychoactive ingredients-see below).

Whoever violates the provisions of this section shall be fined not more than five hundred dollars ($500.00) or imprisoned for not more than six (6) months, or both.

A second offense merits a $1,000 fine; subsequent offenses $1,500 with the forfeiture of the vendor, seller or retailer’s license to do business in the parish.

“I don’t think it’s responsible for me, in any way, to sit up here and make a decision on a substance when I haven’t talked to a professional,” Councilman Chase Melancon opened the discussion only to ignore his own reasoning when it came time to vote.

“This should be the state acting,” declared Councilman Aaron Lawler.  “We don’t have the expertise to make this decision.  I think we’re moving entirely too quickly on this.”

Three separate opportunities for the public to be heard, dozens of speakers on both sides…Kratom opinion covers the whole spectrum; wonder drug or the ruination of unsuspecting consumers.  Pitched as an herbal supplement, Kratom is virtually unregulated by federal authority though Drug Enforcement Agency (DEA) considers it a Drug and Chemical of Concern.  DEA has published a Kratom Fact Sheet that asserts:

“Kratom is a tropical tree native to Southeast Asia. Consumption of its leaves produces both stimulant effects (in low doses) and sedative effects (in high doses), and can lead to psychotic symptoms, and psychological and physiological dependence. Kratom leaves contain two major psychoactive ingredients (mitragynine and 7-hydroxymytragynine). These leaves are crushed and then smoked, brewed with tea, or placed into gel capsules. Kratom has a long history of use in Southeast Asia, where it is commonly known as thang, kakuam, thom, ketum, and biak. In the U.S., the abuse of kratom has increased markedly in recent years.

Is there a less credible federal agency than DEA which perpetuates a War on Drugs that was lost decades ago?

“When my sheriff supports the ban, that gets my attention,” Parish President Clint Cointment added his thoughts to the mix.  “When I got local doctors, people that I trust, telling me, ‘Clint, this is a problem in our parish’…I wish this council would step up and be the first to ban Kratom.”

The executive opinion could have been more persuasive had any of those doctors or Sheriff Bobby Webre deemed it important enough to show up on Thursday.

“If it saves one life, and it saves a family, kids, a marriage, I don’t mind stepping out and Ascension Parish being the leader of anything…ever.  That is what we are about,” Cointment said..

Several Kratom proponents have claimed that its use has saved lives, families, and marriages.

Councilman Travis Turner, an attorney whose practice includes criminal defense, criticized the proposed ordinance as “suspect at best” since Kratom is not listed among the Controlled Substances Act’s regulated substances.

“Criminalizing (Kratom) and we’re not even sure of the effects; and now we’re going to schedule it; I, II, III or IV?” Turner wondered allowed, omitting the fifth schedule.  “If it was such a big deal, why had none of us heard of it until Joel (Robert) brought it up at Strategic Planning?”

Turner’s chief concern was Kratom possession being employed as a pretext to search a possessor’s vehicle during a traffic stop.  Noting that products marketed as Kratom often contain other substances, what percentage of any given substance should be Kratom before regulatory efforts apply? What is considered Kratom?  A product that is 40% pure, 60%…?

Turner framed the argument as “individual liberty versus public safety.”

“There may be this beautiful, pure, unadulterated version of Kratom that exists somewhere,” mused Councilman Michael Mason.  “The stuff that they’re selling at gas stations is obviously not it.  Our Job is to protect the people from the stuff that’s hurting and killing them.  That’s obviously what’s going on at the gas stations.”

There’s an awful lot to unpack in those blanket assertions.

“Until we know more, I say we get it out of the stores,” Councilman Dal Waguespack concluded, noting the Sheriff Bobby Webre’s intention “is not to punish” the user and/or possessor.

The original ordinance, introduced at the August 4 council meeting, would be revised pursuant to a motion offered by Councilwoman Teri Casso “to ban the sale of the product in our parish.”

“As a citizen of this community, as a leader here, what I certainly want to see is some legislation come down from the state (and/or) federal government,” Casso remarked, adding that the Parish Council has a “responsibility to protect our citizens.”

Whether those citizens want that protection or not.