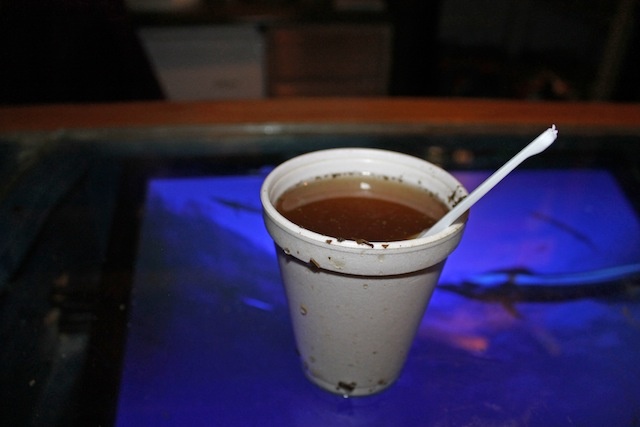 Someone told me about a place in Wilmington, North Carolina, that sells tea brewed from “some weird drug called kratom that’s illegal in Thailand.” The place—a tiki bar called Kat 5 Kava that doesn’t serve alcohol—is like some sort of toned-down methadone clinic or legal opium den, I heard. I was intrigued.

Even though it’s been around for some time, the media is calling kratom a “new legal drug.” A tree native to Thailand, kratom leaves are harvested and dried to create the drug, which was banned there in 1943, after people had started to use it as an opium alternative and the government realized it wasn’t being taxed.

Last week, I was out drinking at a bar down the street from Kat 5 Kava, so I stopped in to try a cup of kratom tea. Inside the establishment, a group of people sat sluggishly at a table near a bar that was surrounded by multiple screens playing nature videos of whales swimming in the ocean and deer frolicking in the woods. I looked at the menu on the wall. Half of it was full of beverages made with kava, a plant root used for sedative and anesthetic effects. The other half of the menu consisted of kratom drinks and powders, which were supposed to give an “opiate-mixed-with-caffeine kind of buzz,” according to the server.

There are three different kratom powders sold at this bar: White Borneo, Red Mystic, and Green Peace, each of which costs $2 a gram. The United States has a variety of kratom powders, such as Thai, Indo, Bali, Malay, and Sumatra. I stood there perplexed when I noticed the “brew” for $10 on the menu. A friendly patron with bags under his eyes added, “It won’t make you sleepy too much… that one won’t.”

…each brew contained approximately 5 grams, but he warned me that if I didn’t have a tolerance, I should limit myself to under 9 grams…

I went ahead and ordered a cup of “brew,” which is kratom powder mixed into hot water. The server told me that each brew contained approximately 5 grams, but he warned me that if I didn’t have a tolerance, I should limit myself to under 9 grams to avoid getting queasy, because 5–7 grams would provide a sufficient high. Apparently, 9 grams is when people begin to feel queasy, the worst physical side effect of consuming the hot tea.

The brew was poured into a Styrofoam cup with a ladle from a tub. Honey was sitting out on the counter to help alleviate the tea’s bitter taste. But even though kratom is “all natural,” the drink tasted thick and chalky, like crushed-up pills. I must have dumped two teaspoons of honey into my cup.

I took a few sips, but it still tasted too bitter. I drank as much as I could. I couldn’t finish it, so I decided to head out for a real bar where alcohol could wash away the bitter taste in my mouth. I felt a little buzzed, but I wasn’t sure if I could attribute that to the kratom or the alcohol I had consumed earlier in the night.

The atmosphere of the place stuck with me. I researched kratom online and found some pretty sensationalized articles about it, comparing it to bath salts.

There’s also a lot of websites out there praising the plant, crediting it for being a healthier option for opiate addicts and a great remedy for recovering heroin addicts. Kratom has gained popularly in the US in the past few years, particularly in southern states like North Carolina and Florida.

I went back to Kat 5 Kava for a second time, during the daytime, before I had consumed any alcohol, to see if the experience would be different. When I arrived at 4:30, it was packed. A middle-aged man sat there wearing sunglasses indoors. There was only one empty seat at the bar, so I grabbed it and ordered another brew, one that I was determined to finish this time. I was sitting next to a 19-year-old guy named Bob Swinson, who told me that kratom keeps him in check. “I have ADHD, and the kratom helps me calm down. I’m not on meds for ADHD, but it helps keep me level,” he said as he alternated between chatting with patrons and sitting statue-like with his face pressed into the bar. On my other side was an ex–heroin addict who was recently released from prison. For this patron, kratom helps him with his heroin cravings.

I spoke with a server, Brianna Garrett-Sanders, about her clientele. According to Sanders, the bar has been selling kratom since January of 2012, and “75–80 percent” of the establishment’s clientele are people in recovery. As I sipped on my cup of tea, Brianna told me that kratom gives off the same feeling that opiates would. It works on the same part of the brain as opiate receptors, but instead of attaching onto these receptors, they bounce off, she claims, making it difficult to get physically addicted. Kratom is a lot less dangerous than dope or pain pills, but it’s a helpful tea for people who have issues with pain. “It’s holistic. It’s just a plant. It’s a lot more safe than prescription medication,” Brianna said.

After my first brew, my eyes were starting to feel a little heavy, and I began to feel relaxed and a bit chatty. I would catch myself getting very fixated on things: a text message, a nature film, or a conversation. It brought me down to a calmer level, because I often feel anxious and overwhelmed, thinking about too many things at once.

But as I finished my second cup of brew, I noticed a shift from a relaxed state to a place that was slightly anxious. I went to use the bathroom and found myself clumsily fumbling to turn the doorknob. I felt like a slug trying to maneuver around the bar. I started to feel very dehydrated. I stuck out my tongue in the bathroom mirror and saw that my tongue had a layer of white, which was very attractive.

My eyes were a little bloodshot. I went back and ordered some water.

I chatted with a 28-year-old named Jordan Culler, who told me that he does kratom on a daily basis. He has never had a drug problem, but he enjoys the benefits of the plant because it helps him to focus. According to Culler, “It’s like coffee without being jittery. You’re more relaxed, and you can focus. It just loosens you up,” he said, noting that he drinks it before work.

Kava used to be served in coconut shells at Kat 5 Kava, but since the coconut cracks caused the kava to spill everywhere, the bar serves it in clear plastic cups. His friends bought me a kava shell. They all chugged it as if it were a shot. I politely had a few sips. It tasted worse than the kratom. I couldn’t drink it, but it wasn’t the flavor that I couldn’t handle. I started to feel extremely nauseated, which was entirely my fault, as I had ignored the original server’s warning—9 grams was the magic number. It was a queasy feeling I have felt before, like when I had mixed downers with uppers in a previous experience, or had drunk one too many Red Bull–and-vodka cocktails. It didn’t feel good.

I was mad at myself because I realized that, from observing others, I could have just bought a few grams at a time, and my server would have mixed it in some fruit juice for an easier intake. I could have monitored what I had consumed a little better.

I closed out my tab. I left the bar and googled “how to come down off kratom” when I got home. “Nothing kills a buzz more than eating,” one message board mentioned. It suggested carbs as the quickest fix, so I went to a nearby pizza place and inhaled a slice. Within a time span of 15 minutes, I felt fine, but when I got back home, I started to itch. I couldn’t stop scratching my stomach and arms. It wasn’t that bad, or enough to be torturous, but it was a little uncomfortable. I started wondering if it had something to do with the kratom. I had trouble falling asleep, and I woke up with a killer headache the next day.

In the past, I’ve made myself sick and dehydrated by drinking too much coffee. The two are pretty comparable. I drank too much to feel the full effect, and if a little nausea and itching is the worst thing that can happen, the side effect is not too shabby. Even though it was fun to try, I’m not the biggest fan of kratom. I don’t like the taste or the dizzy high. I’m a bit weirded out that the advocates for it seem to want—or perhaps need—to take it everyday. But if it is helping people wean themselves off of dangerous opiates, then order another round of drinks, bartender.